How small museums can win over large, multi-million-pound attractions.

Whether you have millions to spend on your museum or not, its success relies upon stories and relevance. Here’s how small museums can sometimes win over large, multi-million-pound attractions.

A tale of two holidays

I’m a bit of a sad git, if the truth be known. Even when I’m on holiday, I can’t help visiting museums to check out their exhibitions and interpretation. This year I’ve been on two holidays. The first was a camping trip to Anglesey in Wales with a group of friends. The other was to the Greek island of Crete, with my partner, for some well-earned R&R. I spent a morning in a museum at each location, and they couldn’t have been more different or surprising.

Our first museum was an unplanned visit to Anglesey’s Transport Museum. Our itinerary for the day had originally included a visit to the beach but, in keeping with the British camping tradition, the weather had other plans and decided that horizontal rain was a better idea. So instead, six of us, aged from 14 years to 50 years old, headed to the Transport Museum.

This small, family run attraction is exactly like you might expect. A ramshackle collection of bikes, cars and military vehicles that appears to be a petrol-head’s passion that has grown out of control. With around 200 vehicles on display, I guarantee that at least one of your group will exclaim “My dad had one of those!” Each one of us walked around the site, reading every panel, sign and object label we could find. We looked at every exhibit and small object in the place and every one of our group had a great time. 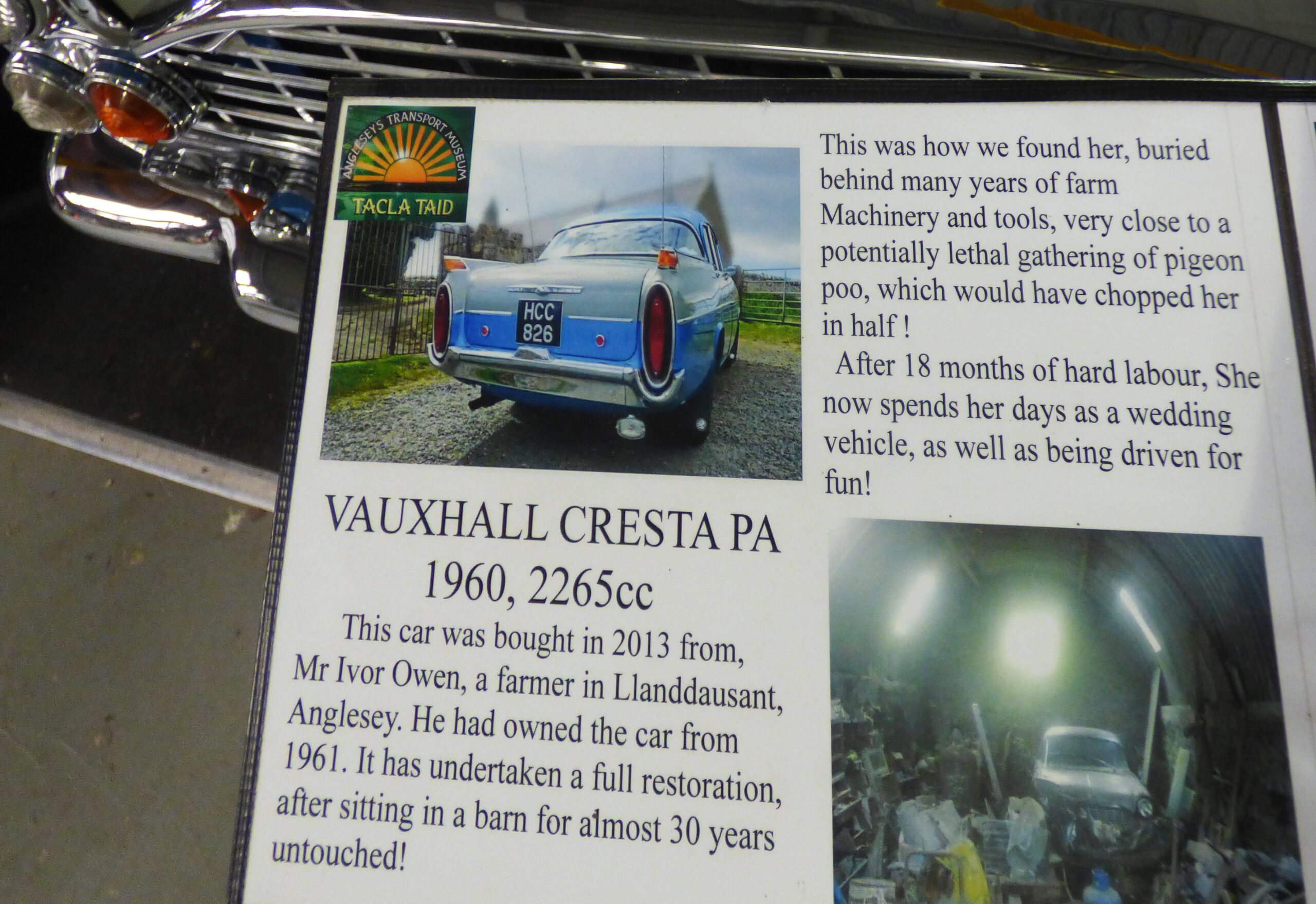 It’s all about the story

Each vehicle had a very simple interpretation panel made from a laminated A4 sheet, straight from a desktop printer. We’ve all seen them, and usually, they’re pretty unfulfilling, listing facts, dates, technical specifications and the like.

But these panels were different. These panels each contained a STORY! We found out where the car had come from, who had owned it previously and what kind of life it had enjoyed before it got to the museum. We were given interesting titbits of info about what made that particular model or marque special, which TV shows had featured them and which famous people had sat in its seats. We heard about Fred down the road who used to keep chickens in the van which was on display, and how many hours of work it took to bring that vehicle back to life for display in the museum. There were stories everywhere, and we could hardly wait to get onto the next vehicle to get the next instalment.

To be honest, I hadn’t expected much when we’d set off on our rainy day excursion to this small, ramshackle family-owned attraction. But we got so much more than we bargained for. Sitting in the museum cafe afterwards, enjoying tea and cakes, we were all chatting about the exhibition, delighted with our unexpectedly engaging visit.

Fast forward six months and it was time for another holiday. I’d worked on a selection of projects over the previous half-year, from a series of stories and puzzles for escape rooms in Dubai with, to the newly opened Historic Collection in Bromley. After all that fun, we decided a holiday in Crete was just what we needed.

Reading the Lonely Planet guide, it said that no visit to Crete was complete without a visit to the capital’s newly refurbished Archaeological Museum.

So we went. And, don’t get me wrong, it was an awesome spectacle. The huge collection of historically significant items was fabulously well displayed. Many of the objects were a delight to behold and it was almost unbelievable to be in a room in close proximity to such impressively old and beautiful objects. Even the interpretation panels, printed in vinyl and displayed between two sheets of clear, crisp Perspex – these panels looked beautiful. Really, the whole experience was stunning to look at. 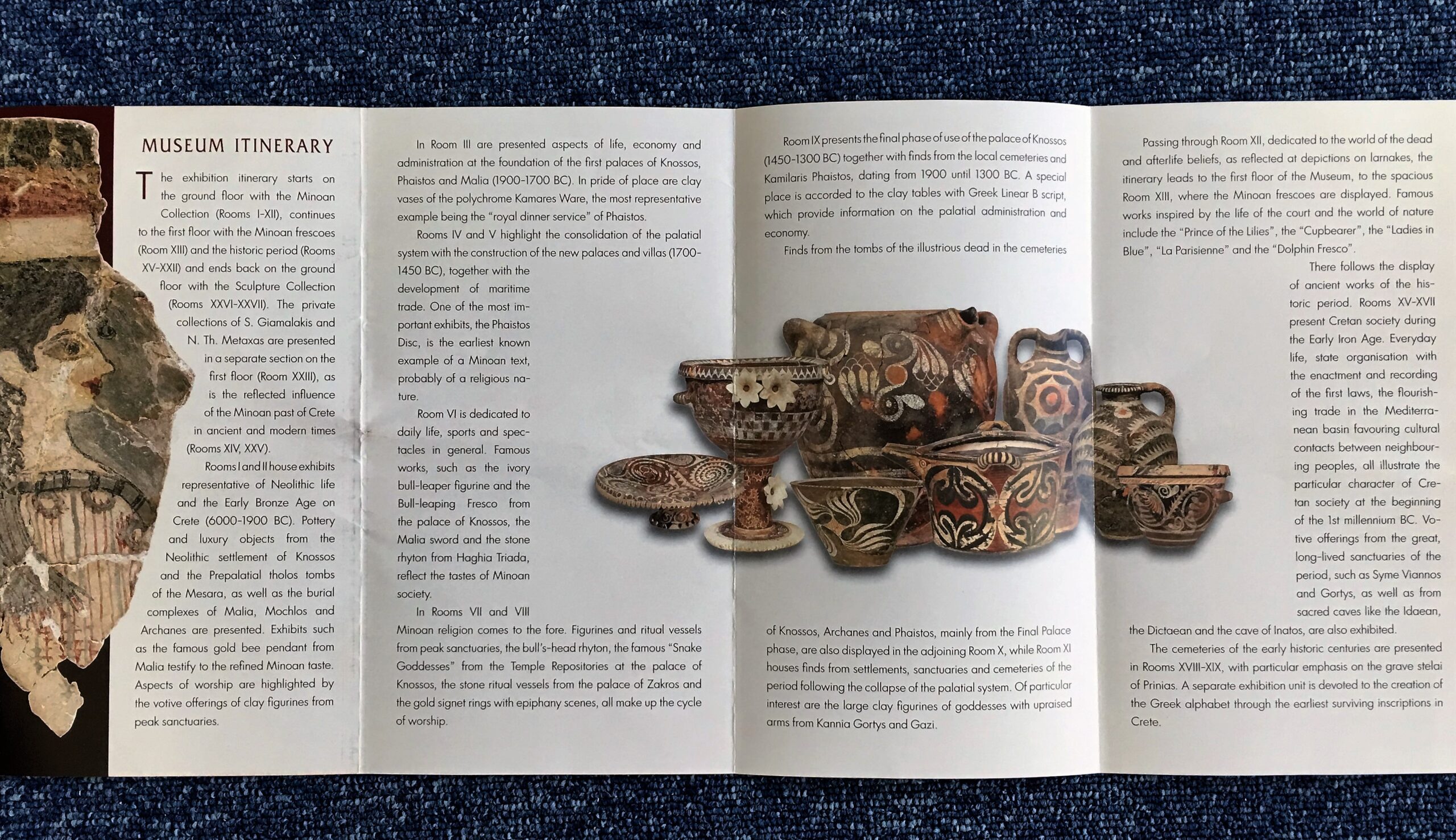 I was left with a feeling that I’d missed the point. I didn’t understand the relevance of the objects and why they were considered important enough to be on display, beyond the fact that they were old. I tried to read the interpretation panels, I really did. But each one I read was laced with facts, data and jargon terminology that I didn’t understand or could not relate to. In my view, the panels fell foul of one of interpretation’s golden rules – Don’t make your visitor feel stupid.

Maybe I’m just stupid? Maybe I’m too stupid to understand the display. But then, I don’t think I’m any more or less educated about Cretan and Minoan history and culture than the rest of the tourist visitors in the place that day – all of whom were walking around with a glazed expression. Nobody was chatting enthusiastically in the café afterwards this time. I’m bewildered by the thousands of glowing reviews for the museum on Trip Advisor and I can’t help wondering if the reviews are authentic. They certainly bear little resemblance to my experience.

How to fix it

So how could the experience have been improved? Well, it comes back to the stories. Try as I might, I couldn’t extract the stories from the objects or the interpretation. I couldn’t understand why the objects were chosen for display, or get any more than a basic explanation of why the object was relevant. ‘For ceremonial purposes’ or ‘Found in Hersonissos’ was the best story they had to offer. I wanted to know the story of how it was found, or why the snakes were considered so highly, or at least the sequential timeline of when the objects were in use. Anything! But, alas, there were no stories. The fact that the objects are old is, apparently, enough for many people.

The museum might have benefited from some means of introducing the visitor to the collections they were about to see. Very few of the objects were self-evident, and few could be understood without some supplemental information, no matter how prettily they were displayed. We walked around the museum desperately trying to get a handle on what we were looking at, hoping that as we walked around the story would become evident. But no.

An introduction to the collection, like a trailer for a film, would have gone a long way to helping us to understand the museum’s collection and its aims. Whether an introductory series of panels, short film or animation or a decent leaflet when we paid for our tickets – any of these would have helped to set the scene. As it was, the leaflet we received was simply a cliff-face of text, awash with jargon and terminology that didn’t engage us one bit. With just a little bit of prior knowledge, we could have made more sense of the collection as we viewed it – had something to hang our hat on, so to speak.

Appealing to your audience

I’m guessing, the interpretation at this museum was written by an academic with a detailed knowledge of the subject. Unfortunately, the interpretation was written as if their visitors were their equally academic peers, rather than being written for the visiting touristic laypeople. And unfortunately, as a result, much of the wonder and amazement that we could have no doubt experienced was lost to us. This beautiful and historically awesome collection was let down, but for the want of the stories that remain hidden from view. And that is such a frustrating disappointment. Collecting awesome objects is the hardest part of a museum’s job. Telling their stories is the easy bit. It’s such a shame that this museum missed such a fabulous opportunity, essentially spoiling the ship for a ha’p’orth of tar.

Without stories, your objects are simply eye-candy. Surely, our interpretive responsibilities insist that we should do better. After all, we only need to look to the Transport Museum in Anglesey to see what can be done with very limited resources.

The lessons to learn here are: